Hidden underground on the roots of trees grows a fungus whose fruit is considered to be the most expensive edible mushroom in the world: the truffle. And until a few years ago, they were thought to only be found in parts of Europe.  Unsurprisingly to many of us in the South (where we already know there’s gold under our feet and magic in our forests), Tennessee Truffle founder, Dr. Tom Michaels has found that truffles—with time and care—can be cultivated successfully in the foothills of Tennessee.

In 1999, Dr. Michael’s began his earnest black truffle cultivation in the foothills of the beautiful Blue Ridge Mountains in eastern Tennessee. He knew that when it came to growing truffles, it was going to take the perfect climate, soil, science, intuition and most importantly: patience. Finally, in 2007, Tom produced the first commercial quantities of Perigord truffles grown in America, which received glowing praise from some of the country’s top chefs.

Dr. Michaels has since helped Blackberry Farm to start its own Hazelnut orchard and begun the process to inoculate the root systems of the orchard with fungus that years from now will produce the black gold that chefs and consumers alike crave. And when we say “years”, we mean the better part of a decade.

Commonly harvested by pigs that “sniff out” the black truffle’s characteristic scent from above ground, it has been discovered that there’s also a breed of dog that is capable of tracking down the scent of these morsels.  The breed, Lagotto Romagnolo, is more affectionately known as the “truffle puppy”. Since there are only a handful of trainers that exist who can help these puppies grow up to be champion sniffers, these dogs are about as hard to find as truffles themselves—that is, unless you’re at Blackberry Farm. 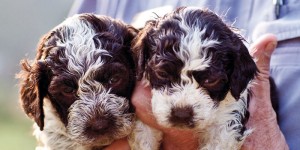