Not even one year ago, we met Ron Morrison on a piece of property he owned in Fosters, Alabama.  Ron had purchased the property a few years back, with the vision of having a place hunt, but also a place to stay while attending Alabama football games.  He built a small camp house, planted a few green fields and was set.

In the spring of last year, Ron decided to thin his timber and clearcut a six acre plot near the cabin to be transformed into a field.  By the middle of May the timber had been thinned and the six acres had been clearcut.  Ron partnered with BlackRidge land Company to stump the field, burn the debris, lime, fertilize and plant the field in a summer wildlife mix.  In addition to the construction of the new field, BlackRidge also enlarged three other food plots, planted them in chufa, built a comfortable 8×8 shooting house on the new field, and worked all of his roads.

The new field brought new opportunities to the property for both Ron and the wildlife.  The deer, turkey, and doves enjoyed the corn, brown top, and sorghum throughout the summer and into the early fall.  After a couple of dove hunts we drilled triticale, oats and clover into the field to provide a winter food source for the wildlife that had come accustomed to feeding in the new field the previous summer.

This past weekend was opening day of turkey season, and Ron took a good client of his and the client’s son to try and get the young man his first turkey.  As the sun cracked the horizon four turkeys began to gobble.  Three of the longbeards were roosted on the chufa patches, and the fourth right off the edge of the new six acre field.  They set up in a ground blind on the edge of the field and after a few soft yelps the mature turkey stood twenty yards away.  I believe the picture tells the rest of the story. 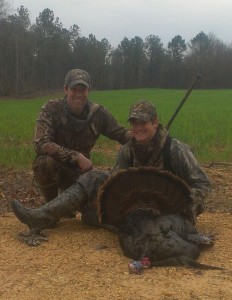 Ironically, last Friday morning Ron and Kelly sold their Fosters property.  A prospective buyer who had looked at numerous places during the last year saw the Fosters tract and fell in love.  In a conversation I had earlier today with Ron he said, “The sale of Fosters was bitter sweet because it was my first place, but without a doubt the improvements of the cabin, new field, road system, etc… made the sale.”  He went on to say, “Even though we signed the papers on Friday, I made sure that we agreed that I still retained the hunting rights through the opening weekend of turkey season!”

A big thanks to Ron and Kelly Morrison for letting BlackRidge Land Company share their story and the opportunity to assist them in the transformation of their Fosters property!

“Blackridge Land Services (specifically Thomas and Brian) have been a great partner for my wife Kelly and me. Being landowners who both have full time jobs, we don’t have time to get down to the properties and meet contractors etc. Blackridge handles it all when it comes to wildlife management. They have done an excellent job of working in conjunction with our forester to take our properties to the peak of their potential. On top of that, they are always responsive and on time when you need to meet to look at a project.  They have certainly made our life easier, and we are glad we found them!”